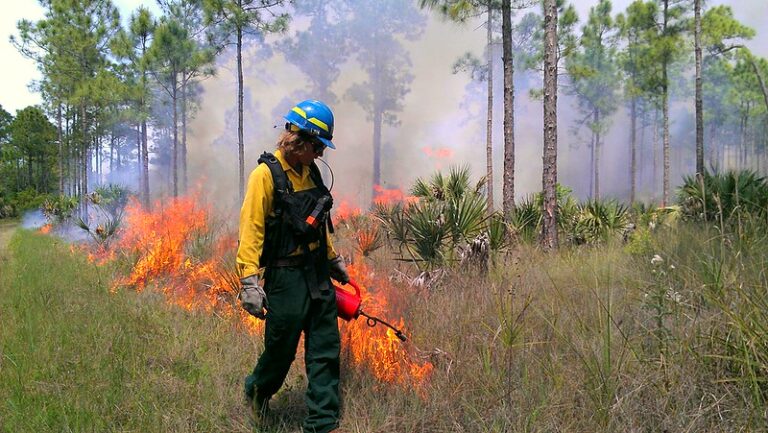 March 24, 2022 – Much of what is known about planned fire comes from a burn manager’s memory.<br>

“It takes years to get that kind of experience,” says Joseph O’Brien, fire research ecologist with the USDA Forest Service. “If things are changing, like invasive species or climate, or if you’re a new manager, you need help.”

O’Brien, writing in Fire Ecology with J. Kevin Hiers of Tall Timbers Research Station and others, identified a need for more science-based prescribed fire predictions and models. Fire researchers and managers can use these tools to test scenarios, teach new prescribed fire managers, and identify possible improvements in fire prescriptions and plans.

For predicting fire behavior, the Southern Research Station (SRS) team developed and is testing QUIC-Fire. The real-time modeling tool uses 3D maps of fuels and forest structure and accounts for how chemistry, material science, fluid mechanics, and heat transfer interact to influence fire behavior — yet it can run on a laptop computer. “It’s definitely a revolution in modeling and a quantum leap in fire management,” says O’Brien.

QUIC-Fire was created, evaluated, and improved by access to prescribed fire operations, “where we could measure conditions before, during, and after the burn in detailed and extensive ways,” adds O’Brien.

After ten years in development, QUIC-Fire is getting good results in testing.

“We have been building demonstration landscapes on Oconee National Forest and Piedmont National Wildlife Refuge,” says O’Brien. “We’re going to get feedback from the managers who know those lands best. Managers’ insights will mold the product to meet timber stand management objectives. “For example, a land manager could say, ‘We want to manage underbrush without scorching the pines.’”

The new WIFIRE Lab at the University of California, San Diego has integrated QUIC-Fire as the model behind its new prescribed fire decision support tool BurnPro3D.

QUIC-Fire’s developers organized themselves this year as a modeling hub for advanced forest and fire technology. They teamed up with partners from Tall Timbers, the Forest Service’s Pacific Northwest Research Station, Los Alamos National Laboratory, and the University of Georgia.

“Anybody who manages land that is prone to fire has insights that are valuable,” says O’Brien. “Our collaboration with Southern Region fire management gave us the exposure to fire operations that generated the insights we are pursuing. Fire managers have the knowledge we need, and there are gaps they need to fill.  There’s respect for each other on both sides.”

“The goal of the modeling hub is to operationalize QUIC-Fire and the framework of required 3D inputs that also serve to revolutionize fire effects assessment and fuels treatment monitoring,” says O’Brien.